On December 4th, I had the opportunity to see The Strawbs, a British progressive rock band from the 70's, perform at a little bar and restaurant called Krogh's in Sparta, NJ. My Dad had been a fan of their music throughout his high school years, when he too was in a band himself. After reading an article in the local paper, my Dad noticed that they were going to be performing as a three-piece acoustic line up, instead of the usual five-piece electric band in Sparta. He didn't hesitate to purchase two tickets, and use this as an opportunity to introduce me to the music that he loved for the past 30 years.

When the show began on that cold December night, I couldn't help but be drawn into the music that they played. The haunting guitar melodies provided through the wonderful talents of Dave Lambert and Brian Willoughby, and the warm, enchanting voice of Dave Cousins, who used the beautiful poetry he wrote to string together each note, to weave a tale out of each song they played to create the most emotional, moving, and perhaps the most unearthly music I have ever heard.

The songs had stories behind them, such as one entitled "The Hangman And The Papist," which is about the religious troubles that have been plaguing Ireland or "Hero And Heroine," which tells of the dangers that can arise if you succumb to dependence on heavy drugs.

As I sat listening to the Strawbs, I didn't feel as if I was listening to the Beatles or some nostalgic band from another era. I felt that each and every song I heard was fresh and new even though they had been written many years ago. Each song was different, not a single one sounded remotely similar to the other, and I enjoyed each and every single one of them. The music not only entranced, but it made you think about the lyrics. The meaning that was behind the beautiful poetry that provided a backbone to the notes, that flowed from the fingertips of the three minstrels and into the ears of all who listened hypnotically as they were washed over by the plucking of each string, the playing of each note combined to create an indescribably glorious sound.

After the show ended, the members of the band stayed behind to speak with their fans, sign autographs, and take pictures. I found this very nice, but also quite unusual, due to the fact that most musicians with half their talent wouldn't take the time to do that. I, of course, being a new devotee to the Strawbs, had my picture taken with all three members of the band. I even got a chance to speak with my new musical hero, Dave Cousins, who introduced my Dad and I to a young man named Barnaby Hawken, who is the son of John Hawken, former keyboard/mellotron player of the Strawbs.

Through the Strawbs website in England, we later learned that John Hawken had relocated to the United States from England in 1979, and currently resides in Metuchen. In seeking out information on how to get in touch with John Hawken, I contacted Dick Greener of the Strawbs website, and he was generously willing to forward my request for an interview to John Hawken. In response, Mr. Hawken provided me with his number, saying that he would be very happy to do the interview. After giving Mr. Hawken a call, we set a date to meet on January 2nd at a little coffee shop, "Brewed Awakening," in Metuchen, NJ.

During our interview, Mr. Hawken spoke openly and honestly to me about his career in the Strawbs, and about life as a musician. He said that the Strawbs were unlike any other band during that time. Especially with the additions of some of the instruments Mr. Hawken played, such as the harpsichord, which provided the music with an 18th century classical sound, the synthesizer, and pipe organs, that gave the Strawbs their unique sound.

After "quitting" the music business following his departure from the band The Nashville Teens, with which he had the Top 20 hit "Tobacco Road" in America and several European countries, Mr. Hawken joined the Strawbs. He was then working as a real estate agent with his father, when he received a call from Dave Cousins, who was inquiring as to whether or not he wanted to do an audition. After agreeing, he went to a little place to audition along with the two other "soon-to-be" members of the Strawbs, bass player, Chas Cronk, and drummer and vocalist, Rod Coombes. During his audition, Dave Cousins introduced him to the "mellotron", an instrument he had never seen before. The mellotron is a keyboard instrument that plays tape recorded sounds such as a violin being played or a choir singing a certain note depending on the key pressed by the player. Though it was all different and new, he successfully passed his audition and joined the Strawbs.

Along with the other members, Dave Cousins, Dave Lambert, Chas Cronk, and Rod Coombes, this lineup went on to make two albums, Hero And Heroine and Ghosts; Hero And Heroine has just achieved gold status.

Though Mr. Hawken's memories of touring with the Strawbs are, for the most part, fond and memorable, he does remember how difficult touring with a band can be. "Touring can be fun," he said, "but sometimes those long hours spent together can sometimes cause people to get agitated and little problems can get magnified and blown out of proportion." "It wasn't always easy," states Mr. Hawken, "but we did have a lot of fun."

In describing how he learned the music that needed to be played while he was in the Strawbs he said, "You either knew it, or you didn't, that's all there was to it." "In some of the other bands I was in you could kind of "play your way" through the songs, but not with the Strawbs." "The songs Dave [Cousins] wrote were so intricately woven, that there was no space for mistakes." "You had to be completely focused on the music." 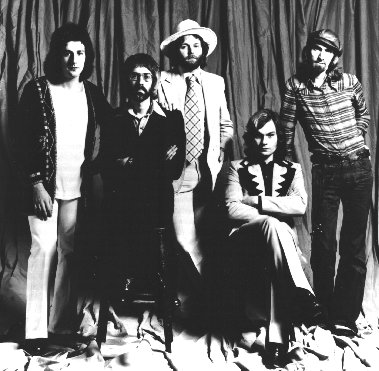 It was also very nice to hear the keyboard player of the band I had come to love, be so complimentary about the other members of the band. "Dave Cousins is the finest writer I have ever worked with," he said. "His songs are so beautiful, the words he writes alone are poetry." "The song could be nothing but words, they can be stripped of everything and they would still be beautiful." "That's what he really is....a poet." I asked Mr. Hawken how he liked the Acoustic Strawbs line up of Cousins, Lambert, and Willoughby, and he said that, "They did a beautiful job of orchestrating the music from a full electric band, to an acoustic one." When asked about the instrumental piece "Remembering" that he had written for synthesizer and electric piano, Mr. Hawken said, "as I sat watching them [the Acoustic Strawbs] playing that song, Brian [Willoughby] was looking at me while playing the piano arrangement on the guitar to see if I liked it....it sounded great!"

On November 30, 2003, Mr. Hawken got a chance to play once again with some old friends at the NJ Proghouse at the Franklin Schoolhouse in Metuchen. He attended as a guest, but joined the Acoustic Strawbs in their first encore, "We'll Meet Again Sometime." Which he says was "very exciting."

I then felt that this was a good time to ask him if this was perhaps the start of another "reformation" of the Strawbs. It was then that he had informed me that Dave Cousins had been talking to him about playing together again. When asked if he was planning participating, he stated "It would be fun, I know my sons [both are musicians themselves] are pushing for me to do it....I think they'll kill me if I don't," he says laughing.

For the past few years, Mr. Hawken has been involved with a local blues band, they play locally in places like Long Beach Island, and more recently at the Pine Tavern in Old Bridge. "I don't think I'll ever stop playing music," he says. "As Beethoven once said, Music is humanity's gift to itself, and I can't put it in better words than that." For more information on John and his music you can visit him at www.johnhawken.com and you can find information about the Strawbs, their music and upcoming summer tour (in full electric regalia) at www.strawbsweb.co.uk . CD's are available for purchase on their site and are also available from www.amazon.com. 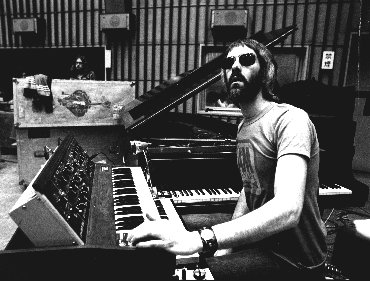 **** On January 10, I visited Mr. Hawken at his home in Metuchen, NJ to deliver a copy of the above article and to obtain a picture to publish with it. I had the rare opportunity to listen to samples of John's new work and to receive my own private "concert," if you will, which featured some of the older Strawbs songs that I had come to love so well. Some of them included "Hero And Heroine", "Remembering, You And I (When We Were Young)", "Benedictus", and "Heroine's Theme" from "Autumn". While getting a picture for me to use in my article, Mr. Hawken pulled out his "old photo archives" which contains numerous photos from the 1970s of the Strawbs, some which are the original copies of ones that have been used inside CD booklets, on the Strawbs Website, and on John's own website.

I also learned that Mr. Hawken is a very talented artist. On my visit, he shared with me some of his humorous illustrations, which are of both friends and celebrities.

We look forward to hearing these brilliant artists collaborate once again.