HERO AND HEROINE IN ASCENCIA - REVIEWS 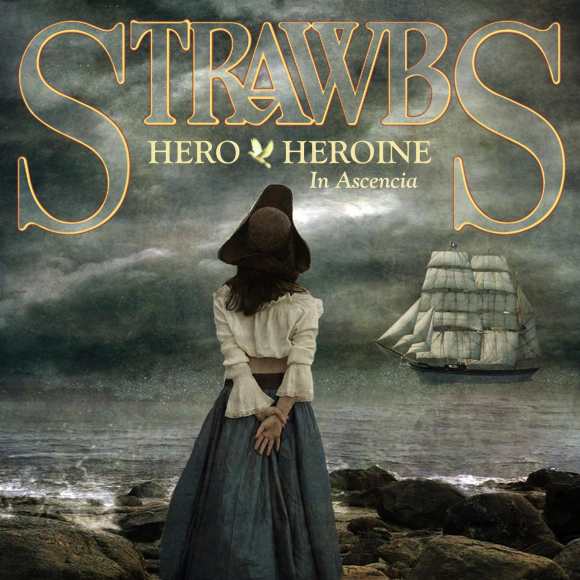 Back to main Hero And Heroine In Ascenscia page

ROUND AND ROUND IT GOES - REVIEW BY CINNIE MORGAN

"Prologue" sets the tone. Dave Cousins' voice, solo, chiaroscuro, black and white. He begs for a little light, the Strawbs rise slowly, backlit. Everything begins to coalesce. Light, color, music. This is Hero And Heroine for a new millennium.

and H&H:IA as mirror images in a rippling pond, it's a lot easier to come to an understanding that they are really not the same at all.

What's different? Obviously, the personnel. We've met Tony Fernandez before. He's an old friend returning home, after a long absence. We have not yet met John Young. He has an amazing resume, having worked with some of the most highly respected classic rock and prog musicians. On his own, his work has muscle and a kind of substantial strength that you would not expect of a solo artist.

We always have high expectations of Dave Lambert and Chas Cronk. At their worst, they are "good." I'm sure I've written that before, and it remains true. Their contributions to this album are exquisite. Had I not been to so many concerts, I would wonder how many takes it took for each one to get such perfect tracks down. It couldn't possibly have been as easy as it sounds.

The work that Fernandez does in "Round and Round" is stunning in that it actually makes the listener dizzy. Put on headphones, focus in on the percussion. I hope you're sitting down.

The Strawbs have been blessed with many extraordinary keyboard players. With this release, the listener is presented with the rare opportunity to compare two of them playing the same music in two very different ways. This is what the very best keyboard players do when they are at their very best: they hold the spotlight confidently and then step back to pull the band together. John Young's solo interludes, in particular "Aurora," are jaw-dropping. Goose bumps on goose bumps.

Dave Cousins' voice has matured. It's very crisp here. After singing these songs – how many thousands of times? – they are a part of him, as much as a limb or his brain is. He is singing for us and for himself. And whether he is singing or playing guitar, this is probably why the music, vocal and instrumental, is so immediately accessible to us. H&H:IA, as was with Hero And Heroine, is more like a living organism than a collection of songs, and Cousins breathes life into it.

If you listen to H&H:IA repeatedly, you pick up the nuances and the subtleties that you missed before. The credit for that goes to Chas Cronk for mixing and mastering. Cronk did what we would all hope to do -- he surpassed his own personal best.

I do not believe that ending H&H:IA with "Round and Round Reprise" is accidental. It seems to be tying up loose ends and tidying things up, before turning out the lights. And Cousins' demonic guffaw scares me.

Re-doing Hero And Heroine and making it fresh and new again was a gutsy move for Dave Cousins, and it required a leap of faith on his part. It worked. Lay a little light on him.

The CD duly arrived, a little late because our Customs got interested in the title!! Unfortunately it arrived on one of those days where things went from bad to worse and to even worse. Then I made the mistake of playing it on a little, tiny extra CD player at low volume. It seemed rather sharp and growly on first listen. Then I tried again next day on the big system at high volume and it sounded glorious-rich, sonorous, immaculately played and extraordinarily well recorded for live sound - right up to Leonard Cohen standard and that' s the best I've heard - well done Paul Smith and Chas.

There are just enough subtle differences to keep the true fan really satisfied while attracting new fans as well. Of course the massed harmonies of the studio version are impossible to reproduce exactly but the singing is powerful and accurate. These days I prefer Dave Lambert's slightly lower pitched voice-just as I prefer Robert Plant now rather than back then - yet neither quite soars onto those high notes like they used to. Even so there is a new richness that more than compensates and DL's playing throughout is superb-he even manages to produce new seagull sounds in "Autumn".

I must confess to being slightly nervous at yet another version of "Autumn" but this one is sufficiently fresh to keep you interested even if no-one ever quite catches the sonorous noises of Hawkeye. John Young's playing, though, is great and he adds something different. So too does Tony Fernandez even though Rod remains a favourite drummer. Perhaps Tony has a slightly rockier style compared with Rod's jazz inflections? - a bit like the difference between Bill Bruford and Alan White - although our man from Portugal employs a bigger range of colours. And then there is Chas providing that lovely fat, soft, melody catching bass-better than ever!

"Sad Young Man" is menacing and powerful while "Shine On Silver Sun" is very elegant. I thought I preferred the Acoustics' version but maybe this one is best - certainly miles better than on Lay Down With The Strawbs where something went wrong with the monitors. The title track is full on and this works although I was hoping for a little more variation as in the fab Acoustic version. "Midnight Sun" builds on the lovely reworking of the Acoustics and has a lovely piano part from John. Then we have one of the classiest "Out In The Cold/Round And Round" versions yet full of energy, fascinating harmonics and menace. 'Lay A Little Light On Me' follows the powerful piano piece "Aurora" - all deep, menacing chords and ice breaking off that puts Pink Floyd to shame. Excellent harmonies and bass working with guitar and keyboards helps build to the Abbey Road cum Who-like riff of "Hero's Theme" and then it switches into an extraordinary reprise of "Round And Round" - a comment on completing circles and exposing fakes capped off by the crazy guffaws/maniacal laughter from DC until the familiar backwards tapes of the original bring it all to a soaring close. A highly polished silver sun indeed.

Couldn't review Hero and Heroine in Ascencia without first reviewing the exquisite artwork. In my opinion, this is the best Strawbs' album cover yet.

On first glance the cover painting appears to be an extract from some renaissance grand master's magnum opus, but it is painted by a modern artist: Solitaire Miles. Straws fans will already be familiar with at least one other of Solitaire Miles' works as she painted the final version of the Broken Hearted Bride cover. Despite that, art is not Solitaire's main talent. She is better known as a jazz singer!

Although having all the hallmarks of a painting from a grand master, the Leonardos and Raphaels of this world would not have been able to produce the artwork, as they did not have the technology that has been used here. The front and rear covers form what would have been known as a diptych, i.e. two images that are hinged together. Triptychs (three images hinged together) are often found in churches, but the diptych is ideally suited to a CD cover.

The front cover shows a young woman, wearing a tricorne hat, staring out at a stormy sea, watching a sailing ship. A feeble shaft of light, possibly from an insipid sun, or moonlight highlights the foaming spume, crashing on the rocks just yards from her feet. Even as a single image, Solitaire has captured a lot of the emotion and imagery of Dave Cousins' lyrics: on first sight I thought that the girl in the image could easily be Grace Darling, watching the ship about to flounder on the rocks.

The second image in the diptych completes the story. It is a copy of the first image, with the ambient lighting faded to indicate the passage of time. The girl still stands in exactly the same pose, with not even a hair on her head having moved. The clouds and waves are still in identical positions. Time is frozen. However, the vessel has sailed further out to sea, and is all but a distant memory on the horizon. It is clear that the girl was not watching the ship sail by, or arriving. She is watching it depart. She is Heroine, with Hero disappearing from her life, either sailing to a New World, or wrecked in the metaphorical snowy white sails of heroin. The promise of him staying by her side all winter long has been broken.

With time frozen, it is apparent that she will still be there. Hero will never return. There is a beach somewhere on which you can still find the girl in the tricorne hat, gazing at a white dove fluttering at the edge of her peripheral vision.

Back to main Hero And Heroine In Ascenscia page