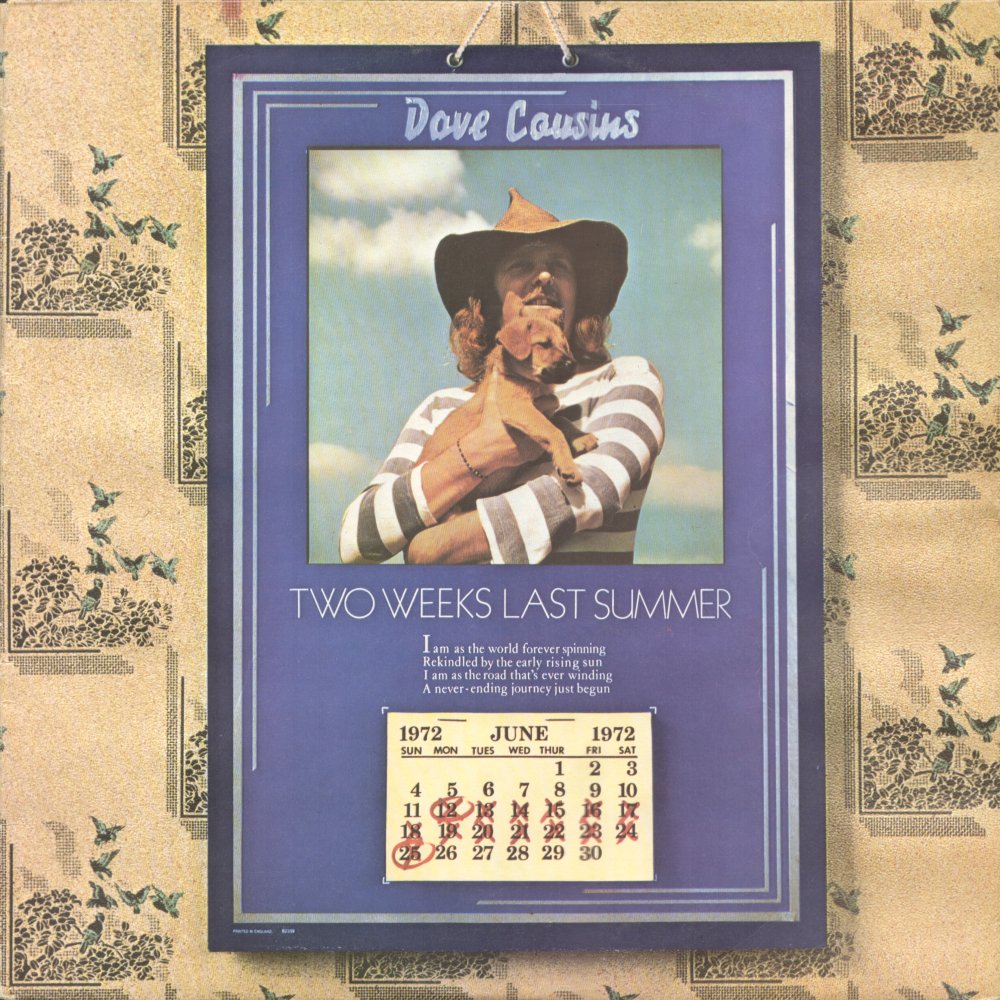 AMLH 68118 (A&ampM, Oct 1972). Single sleeve, textured effect to simulate wallpaper, on which a calendar is hung (the calendar is not textured. No lyric sleeve or insert. Record released with brown A&ampM label and, as far as known, was never re-issued in UK with silver label. On the front cover, bottom left of the blue border of the calendar, the words "Printed In England appear" in very small print, which seems to have been repeated unwittingly on some other versions.

I've long thought it odd that all the Canadian copies I've seen of Two Weeks are on A&M's silver label, which was not introduced until early 1974, and this album was released in late 1972, around the time of "Lay Down" and before Bursting At The Seams, both of which were brown label issues in Canada. But now a brown label first release has emerged and is settling into the collection at Strawbsweb Central.

In many years of collecting I've never seen one till now. My guess is that the album was released in relatively small numbers in 1972, and bought by fans who even now aren't getting rid of it. As Strawbs built up their following in Canada, playing a celebrated show at Massey Hall, Toronto on 31 May 1974, and Hero And Heroine started climbing the charts, A&M were moved to re-release it, probably around the time they put Early Strawbs together, also in 1974.

Vinyl album (Can): SP 9008 (A&ampM Can, no date - probably 1972). The sleeve is as per UK, but not as well put together (some white gaps on the back, and the Canadian address overprinted in black), Canadian number instead of UK number. Same "Printed in England" wording - it may have been then overprinted by A&M Canada. Or just a mistake. Copy I have comes with A&M "Listen To Your World" company inner sleeve.

Back cover and flyer

No Obi on my copy, or booklet, so see notes on Japanese promo release below.

The label for side 2 could have done with some closer proofreading too: "When You Nere A Child" and "GoinO Home".

Obi is like Bursting At The Seams with a flap on the back that folds back to see the top few items. The front is gold with red lettering (quite hard to read) and anniunces that the LP is in the A&M Singer Songwriter series". All text in Japanese, and no pics, so difficult to work out, but it appears the following are being advertised:

The lyrics are set out in Japanese and English, though it's not a bad job as Japenese lyric transcripts go, there are a few mishearings (easy problem to have - there was no lyric sheet in English and the lyrics for this album were notoriously difficult to transcribe). My favourites:

On some copies there is a red second Obi, the back of which is blank.

There is some evidence online that there was a South African release, more info if I can get it. Picture is too small to be sure, but it doesn't seem to match typography of any of the known brown label releases. Anyone have any more info?

ZCAM 68118(A&ampM). Track listing for cassette is different:
Side 1 - October To May, Blue Angel, That's The Way It Ends, Going Home
Side 2 - Two Weeks Last Summer, The Actor, When You Were A Child, Ways And Means, We'll Meet Again Sometime.

Y8AM 68118 (A&ampM). This had previously not been thought to have been released on 8-track, but a copy has emerged.

The 8-track has a very different running order:

Attractive CD booklet following style of album cover. Includes 8 page insert, outer cover reproducing the album cover on the front and a track listing on the back. Inside, for the first time (the vinyl LP did not have a lyric sheet), lyrics for the songs in black and white against a background taken from the wallpaper detail. Back of the tray has the track listing along with the DC plus (Lambert's) dog photo. CD in blue and white, again incorporating the wallpaper design.

Card sleeve Facsimile CD (Japan, Muskrat RATCD 4217, 2004): Mini LP sleeve CD, textured like wallpaper on both wallpaper and calendar (calendar should be untextured). They've used a slightly darker scan of the LP. OBI includes ad for Old School Songs which came out at the same time. Two sided insert featuring very garbled version of the lyrics which Muskrat have created themselves by listening to the album (I know it's difficult to work out the words in some cases, but there are some amazing interpretations). Also included a one-sided 2x2 CD sized b/w insert with track listing and Japanese text. CD comes in soft fabric bag.

Facsimile CD, 400 copy limited edition (Japan, Media Arte MA-0031, 2005): Facsimile mini LP sleeve CD, with wallpaper textured as with original album. CD comes in a mini dustsleeve, with lyrics on both sides - however this is the garbled version of the lyrics, lifted from the Muskrat release. Obi has a brief excerpt in English from Strawbsweb on the front, ads for other releases on the back, including Old School Songs which came out at the same time. Also included is a 2x2 CD sized b/w insert: one side includes more from the Strawbsweb page on 2 Weeks, and some Japanese text; the other side reproduces the lyric sheet from the UK CD release, thankfully the correct lyrics this time. Though outer packaging doesn't say so, the info sheet includes bonus tracks which do not appear on the SDR release: "The Actor (alternative mix)" and "See How They Run".

Facsimile CD (Airmail Recordings, AIRAC 1703, 2013): Outer cover is a reproduction of the original vinyl album, complete with texturing on the wallpaper, but not the calendar. The Obi has ads for Deep Cuts, Burning For You and Deadlines. Also included is a 2 sided A4 black and white sheet. On one side there is a general Japanese text piece about Strawbs and then information about this particular release. Also noted that this is a 24-bit remaster. On the other side, the song lyrics appear, the same poorly transcribed version as on the Muskrat CD. CD, which is got up to look like an A&M mustard label release, comes in a soft fabric bag. Though outer packaging doesn't say so, the info sheet includes bonus tracks which do not appear on SDR release: "The Actor (alternative mix)" and "See How They Run".

On top of that there is a new single sided 2x2CD sized b/w insert of their own with track details and further sleeve notes credited to Masaru Konish and dated 25 Apr 2013. Includes bonus tracks: "The Actor (alternative mix)" and "See How They Run".