DRAGONFLY - PERFECTION ON A SHOESTRING 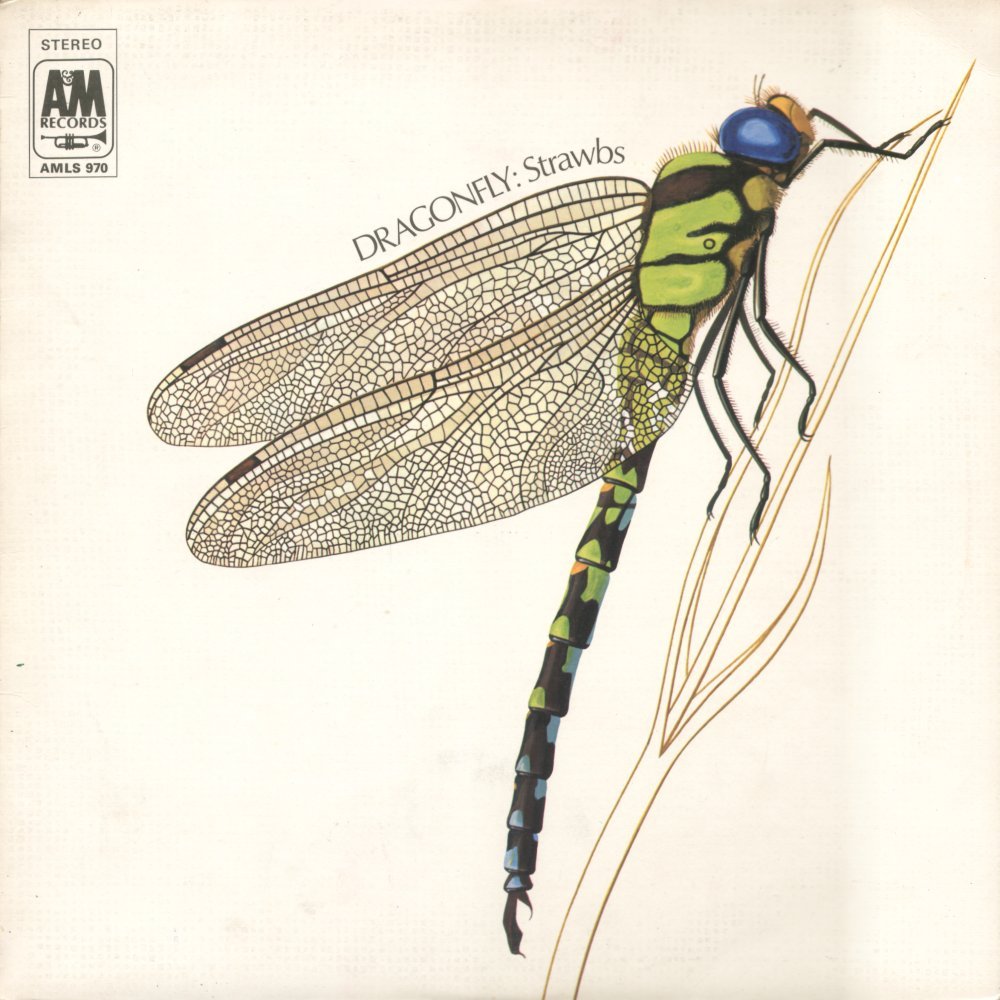 The cost of the first album had been astronomical for the time - particularly given the need to return to the studio - and there wasn't much if any of the A&M advance left. Their next album had therefore to be recorded on a very tight budget indeed. The relationship with Gus Dudgeon had been difficult - Cousins and Dudgeon had argued about mixing levels throughout - and Cousins initially had discussions with Joe Boyd about producing the next album. Though this never came off, Cousins had been talking about adding an extra instrument and Boyd suggested cellist Clare Deniz, with whom he had worked on Nick Drake's first album. Deniz joined the Strawbs in August 1969, and shortly afterwards, the band were on the ferry to Denmark, to record once again in Ivar Rosenberg's studios in Copenhagen.

Dragonfly's producer was Tony Visconti, whose arrangements on the first album had impressed the band. He encouraged Dave to develop the classical feeling in his songs and helped the Strawbs make a pretty, acoustically based, album, and one which actually sounded like the Strawbs as they were then configured. Armed with a theory of music textbook, Cousins transcribed the cello parts for Clare Deniz (twice, as his first attempt had all been written in the treble clef). The Strawbs had already chosen the songs for the album and provided basic arrangements for two guitars, bass and drums (provided by local drummer Bjarne Rostvold), though Visconti was to suggest a final closing track "Close Your Eyes" - an engaging lullaby - to mitigate the possible "bad trip" effect of Cousins powerful epic "Vision Of The Lady Of The Lake " which formed the album's centrepiece, following in the footsteps of the first album's "The Battle".

"Vision" is a 28-verse epic, about the struggle between good and evil. Inspired by the Tibetan Book of the Dead (which Visconti had encouraged Cousins to read), and the Five Deadly Sins, the song took over a year to write. Cousins recalled:

"We were driving up to Scotland one morning very early, and we passed a lake still covered in mist, and for some reason we started discussing the King Arthur legends; then sometime later I read one of the Books of the Dead and somehow the beliefs got mixed in with King Arthur and suddenly I had the story of 'The Vision Of The Lady Of The Lake'."

The basic tracks for the album were laid down in Copenhagen, and Rick Wakeman and Paul Brett added overdubs to "Vision" at the newly opened Morgan Studios in the UK, though there were problems: the tracks recorded in Denmark were out of tune with the piano in the UK studio and there was no varispeed machine, so Wakeman had to play the piano through a Leslie speaker to make it distorted, so that the fact that it was out of tune was disguised. Driven by Cousins' acoustic guitar throughout over a bass and drums backing, the first half of the song sets the scene for a nightmarish battle between the boatman and various creatures, largely represented by eerie noises from Brett and Wakeman. The victorious boatman is offered salvation by the Lady in a calm before the final storm, but as he proves unequal to the renunciation of lust, the creatures arise to swamp his boat and the track ends in a cacophony of noise.

Other tracks recorded for the album displayed the same inventiveness, making the best out of a very tight budget. The album opens with "The Weary Song" followed by the title track Dragonfly, in which the now budget-conscious Strawbs employed a six inch nail they found on the studio floor to provide a variety of sounds. Visconti recollected in an interview in "Jamming" (the Strawbs fanzine published in the 1990s):

"We wanted a triangle effect on "The Weary Song" and it's not easy to find a triangle in Copenhagen in the middle of the night. The nail had a lovely tintinnabulation, so we suspended it from a shoelace and hit it with another nail. We got a lot of mileage out of it, because you can also hear it backwards on "Dragonfly" (that sort of snip, snip sound) and finally, when Dave put down his plectrum and used the nail to get that bouncy effect on the dulcimer. I wish I'd saved that nail, it was one of the most beautiful nails I've ever heard in my life."

The title track "Dragonfly" was a song about an attractive Swedish girl Dave had met: "she was the North Wind in the song. That year there were lots of dragonflies about." It had an unusual tune, and was the first song written on Dave's newly acquired dulcimer. Visconti played recorder to fill out the sound, which with the dulcimer, gives the song a modal feel, perfect for Dave's even more than usually poetic lyrics, almost breathed rather than sung.

Visconti also provides recorder for Tony Hooper's "Young Again", an earlier version of which had been recorded during the second session for the first album - a racy, banjo-dominated affair with duo vocals, which appeared on the Strawberry Music Sampler. The Visconti arranged version of "Young Again" had Tony Hooper handling the vocals, with Cousins playing a child's piano on the instrumental break. Visconti recalls making the notes "deliberately fluffy in keeping with the innocence of the song".

Another new song (also aired in an early version on the Sampler) was "I Turned My Face Into The Wind", a bleaker than usual Cousins song, written after a walk on a very bleak moor in Yorkshire, near Barnsley. Cousins played piano on the track for the album, and Tony Hooper remembers playing quietly tasteful electric guitar.

"The Weary Song" was also an evocation of Cousins' bleaker side. As the LP's first track, its acoustic strumming, blending with Clare Deniz' cello and the Strawbs bitter sweet harmonies, along with Cousins' understated vocal, is a perfect introduction to the mood of the album.

On a lighter note, "Josephine, For Better Or For Worse", rescued from the outtakes of the first session for the first album and issued oon the Sampler), is here given a simmpler though attractive acoustic backing. The song dates back to Strawbs' drinking days in the London folk clubs, when they found a willing companion in Brendan Behan's brother Dominic. On one particular occasion, Strawbs and Behan had been out until the small hours, drinking in a pub round the back of Oxford Street. Cousins explained, when introducing the song in 1977:

"I remember one time when we ended up in a pub, spent all night there, drinking away at a bar they had in the cellar downstairs. There was Tony, Ron and myself, and we got in Ron's old van and Dominic was so paralysed he had to be put in the back. Ron had his bass in the back, so we laid Dominic across the bass. We got back to Hounslow with three of us in the front and we got stopped by a policeman. It was terribly foggy and we couldn't see anything, ... And he said, 'OK out you get', and I remember him shining his torch in my face ... And he said, 'what have you got in the van'. We opened up the van, and there was Dominic splayed across the bass. And somehow he let us go, God knows why he let us go."

Reaching Dominic's home in Heston, they propped him up against his front door, rang the bell, then ran away like naughty schoolboys, leaving his wife Josephine to find him on the doorstep. The next day they were spotted by Behan, out walking with his wife. The Strawbs fell over themselves to apologise, but Behan just said to think nothing of it - his wife and he had been married for 13 years and they were still very much in love. Cousins' song is inspired by the strength of this relationship. "Josephine" remained a regular feature of the Strawbs live sets in the late 1980s, with blistering guitar solos from Brian Willoughby.

"Another Day" is the first of Dave's Devon beach songs - according to Dave, performing the song solo in Staines in February 1977:

" ... this one was written ... ages ago ... on my first venture ever into the West Country, the beginning of my love affair with the West Country .... down in Mevagissey in Cornwall, one of the nicest days I ever spent wandering around there."

With an Irish folk tinge to it, it is a jaunty anthem to the beauty of the Devon coastline, in which Cousins describes the scene, and Hooper picks up the tale. "Till The Sun Comes Shining Through", another West Country-inspired song, is the remaining track on the album, an intricate blend of beautifully picked guitars and Cousins and Hooper's perfect harmonies.

All in all, though not an album which is representative of what the Strawbs became, "Dragonfly" is an attractive snapshot of a band reaching the peak of its folk phase: an album that strives to deliver a contemporary sound, yet one which was rooted solidly on the folk tradition. Whilst, in commercial terms, it was completely eclipsed by the success of later line-ups, Cousins at the time was trying consciously to write material in the folk idiom and "Dragonfly" represents the successful result of this endeavour, as well as offering a glimpse of the acoustic base on which all of the Strawbs' later and more well-known offerings were founded.

In Copenhagen, the Strawbs had also recorded the basic tracks for a single, "Forever". This was subsequently heavily overdubbed, but wasn't released (with "Another Day" on the B-side) until July 1970 - more or less the same time as the new electric five-piece band took to the stage at the Queen Elizabeth Hall, ushering in a major new phase of the Strawbs' career. By the time that Dragonfly was released, however, Clare Deniz had realised, that as a non-smoking, non-drinking vegetarian, her lifestyle didn't mix well with the Strawbs, and had returned to her classical music career, leaving the Strawbs once again to promote an album which, without a cellist, didn't reflect their current line-up.

The changes which followed saw the Strawbs add undiscovered keyboard wizard Rick Wakeman, along with John Ford and Richard Hudson from the Velvet Opera to their ranks and score a major hit with a London showcase concert at the Queen Elizabeth Hall in July 1970 .......