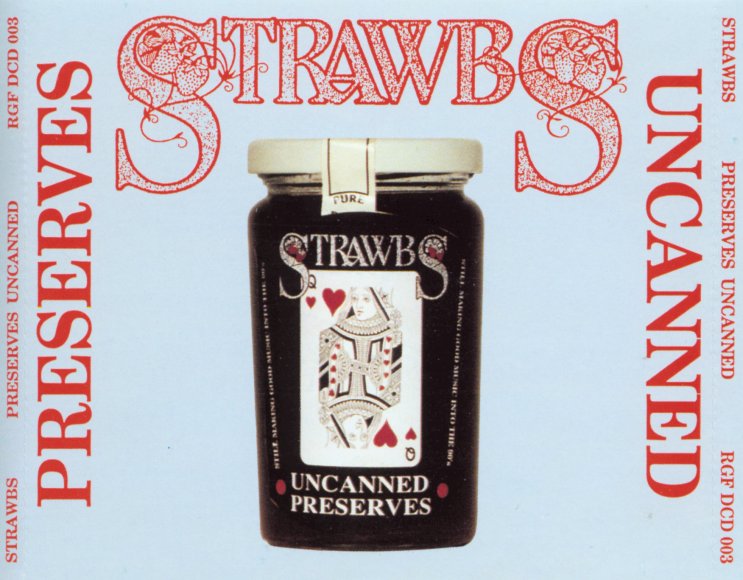 Back to main Preserves Uncanned page

DID I MENTION I DON'T DISLIKE BLUEGRASS MUSIC? - Review by Doug LeBlanc

To be honest, I was kind of dreading this review. I had this album on cassette, lent it out to someone, and never saw it again. I had listened to it maybe three times in total, so this hardly qualifies as a studious review, but here goes.

When I first heard these songs, I pretty much heard what I expected to hear from the older versions of Strawbs songs - simpler, less refined copies of classics that I had known and loved for years. Nothing really jumped out at me (and yes, I was going easy on the medication at the time), save for the bluegrass material.

You know, I knew the Strawbs (nee Strawberry Hill Boys) began as a bluegrass band. However, I didn't really expect them to be a "BLUEGRASS" band! I honestly don't know what I expected, but it was definitely NOT real bluegrass music! Then I bought this, and lo and behold, there were our heroes, playing bluegrass!

Anyway, to hear the Strawbs, my beloved folk-prog band, playing bluegrass, I didn't really know what to think. However, I was unaware of bluegrass music's celtic origins, and have since received enlightment concering this fascinating facet of music.

Now, it's not that I dislike bluegrass music. Please don't mistake me. It's just that when I think bluegrass music, I picture a hillbilly plucking a banjo at a thousand miles an hour, straw in his teeth, whilst several of his relatives twist their fingers into knots trying to keep up. One of them is playing a broomstick stuck into an upside down tube, with a clothesline attached, for a bass. Another is blowing furiously into an old moonshine jug - undoubtedly emptied before they ventured out onto the verandah for some pickin' and grinnin'.

Okay, have I mentioned that I don't dislike bluegrass music? Yes, I thought I did. However, there's Bill Monroe and His Mule-Skinners. Or something like that. My father inflict, er, played this for me many times in my youth. I couldn't tell if he actually liked it, or if he enjoyed the way I would crawl under a hedge to get away from it.

So, the Strawbs played bluegrass music. Interesting. I could see now, after many years of listening to a wide variety of music, how one could develop from bluegrass to folk, and Preserves Uncanned can certainly demonstrate how this happened. There are some very interesting tracks on it.

Yes, indeed, there are. And it is available on CD at my local shop for a mere forty five bucks. Yet somehow, I just can't bring myself to buy another copy of it. Maybe someday, if the price goes down. A lot.

I love the Preserves Uncanned compilation. Actually i heard the early songs from the first albums on it and later picked up Tie Salad [aka Strawbs] and Dragonfly later when they came out on CD. After hearing the Uncanned demo versions of these songs I liked a lot of the rough demo versions over the studio polished versions. I especially like the way "Absent Friend" (aka "How I Need You") sounds here and other songs like "Jenny O'Brien" and "I'll Show you Where to Sleep" and "The Battle". Actually I liked this compilation more than Halcyon Days but that had "Blue Angel" on it - aside from that Preserves Uncanned was more interesting to me.:-)

Back to main Preserves Uncanned page