BURSTING AT THE SEAMS
25 YEARS ON 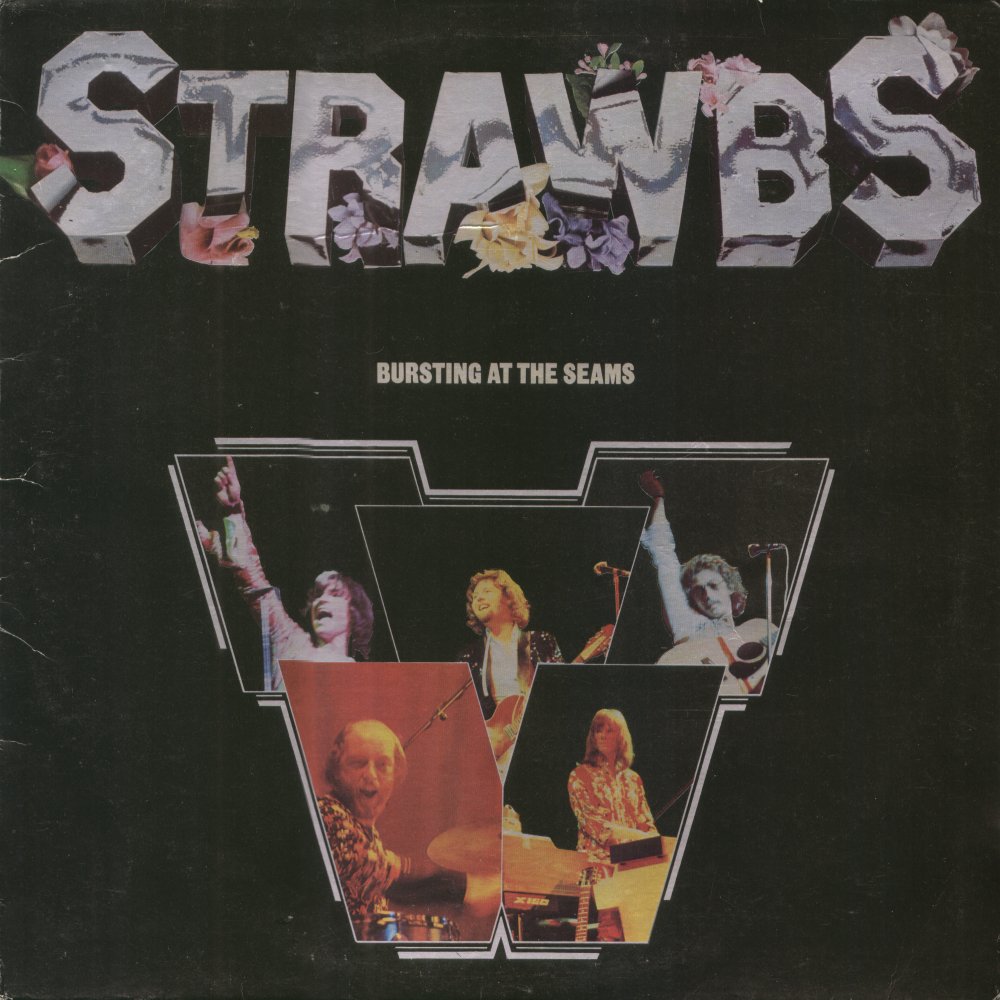 The album Bursting At The Seams was set for release on 26 January 1973, again scheduled to tie in with an exhaustive tour of the UK during February and March. A more simply packaged album than Grave New World, it came in a single sleeve with an inner sleeve containing the lyrics. It actually came out a week later than scheduled, having experienced sleeve production delays (to do with the silver printing on the logo).

Recording Bursting At The Seams

The band went into the studio towards the end of 1972 to record the album. For three months, the Strawbs "lived in the half-light of studioland" as one commentator put it. They started in Sound Techniques in Chelsea and moved on to Morgan Studios in Willesden where mixing and overdubbing took place. The sleeve notes to Choice Selection recount that:

"Alice Cooper was recording at Morgan at the time, and we became big pals with Alice and Bob Ezrin, who was producing him. They loved Bursting At The Seams and Alice and Bob kept coming into the studio to see what we were doing, and we would go in to hear them recording...."

In the end, Bursting At The Seams took around 300 hours of studio time, some of it wasted on discussions and indecision, writing and arranging in the studio. The work rate ended up at around a track a week. Disagreements about choice of material had re-emerged, despite there not being enough finalised material to choose from. (It was this lack of finished material which led to the inclusion of "Part Of The Union", originally intended for release by Hud and John under another name.) Cousins told Jerry Gilbert:

'It came down to a clash between "Burn Baby Burn", which [Hudson and Ford] wanted to do, and "Down By The Sea" one of my songs and one that seemed to epitomise what the band was all about at that time. I had to force them to do "Stormy Down" and "Down By The Sea" to establish a continuity of sound before going ahead with "Part of The Union".'

The sleeve notes to Bursting At The Seams, written on New Year's Day 1973, give some idea of the atmosphere in the studios during its recording:

'Bursting At The Seams sort-of came together between October and December 1972 in Sound Techniques, The Manor and the lounge bar at Morgan Studios. Tom Allom engine driver fiddled with more knobs than Blue on a good day, Hud loved John and John loved Hud, but a third party seems to have come between them lately. Lampoon savagely assassinated the Fuehrer's guitar strings, who got on everyone's nerves from time to time as usual.'

The lyrics were notably much more direct and personally relevant to Cousins himself than had hitherto been the case. He explained to Jerry Gilbert in the Talk In interview in late 1972:

'I've had a lot of personal changes myself recently and this has affected my style of writing amazingly. My songs totally reflect me, the way I feel, the situations I find myself in, my relations to people within the group ....I've been going through a whole sort of personality upheavals where you suddenly start examining yourself again ... I've stepped completely to one side and I'm now writing in a totally different framework. ... my songs before were secretive - almost deliberately secretive - I didn't want people to know what they were about. If they read deeply enough into them they could find out what they were about, but now I'm saying in two or three words what took many words before. It's really a whole reappraisal I suppose. ... The music I'm presenting to the group, it's much heavier, it's much more intense, it's much more emotional.'

Elsewhere Cousins commented that there was:

'... nothing hidden in my songs. Like when I wrote "Flower And The Young Man", I was writing then about a love affair I'd had and deliberately concealing from my family so as not to upset them. Now I write about love affairs. I'm not insulting my family because everything's out in the open and I'm writing more openly and frankly than I have done before. But this style tends to upset people who can't identify with this bluntness. When I say "I sucked on your breast", I'm actually singing about something that happened rather than trying to touch it up and say "the flower shed its last tears". But some people think that was written into the song to make people sit back and say "isn't that deliberately naughty?" Not at all. To hell with it. It's what I think.'

The album contains several of the familiar songs that survive today in the Strawbs' live act, "Stormy Down", "The River/Down By The Sea", "Lay Down" and "Part Of The Union". An interview published in early January 1973 revealed that, originally, the first side of Bursting At The Seams was intended to have a different running order to that which finally emerged. The album was to open with "Stormy Down", followed by "Flying" and "Lady Fuschia". The last two tracks on the side were "The River" and "Down By The Sea" (the order in which the two tracks are inevitably played live).

Introducing "Stormy Down" live, Cousins explains that it was written about the journey the band frequently had to undertake when travelling to and from Wales. Headed back to Devon, where the roads have very high built up embankments on either side, the tree in which he seemed to see the devil's face suddenly loomed up over them as they were lost in those country lanes in the dark. Cousins explained:

'[Stormy Down] was a hill we saw when we were driving back one night from Swansea. I thought it was such a great name. Later that night we got lost in the dark on our way home and the song is about that experience."

At the time, it caused some conflict within the band - part of which may have been generated by its being the intended next single (at least in Cousins' mind), but ousted by "Part Of The Union". In hindsight, with Lambert's careful guitar phrasing interspersed between Cousins' vocal lines, and the others joining in on the chorus, the simplicity of the bass and drums was just right, and it remains one of Cousins' most perfectly realised pop songs, and could well have done well as a single (though no doubt a "cloud that looked like God the Father" would have raised hackles at the BBC!).

The epic pairing of "The River" and "Down By The Sea" has with a few breaks been a mainstay of the live set. The two tracks appear in reverse order on the album, with the opening guitar run and chords leading into the first Cousins acoustic passage on "Down By The Sea". Then, Lambert's power chords and vocals dominate the middle section from which the album draws its name. Cousins recalled in the notes to Choice Selection:

'The song was very much tied up with my crumbling marriage, but it was actually written walking along the sea wall with this mountainous sea in Dover.'

The version of "Lay Down" included on the album is a re-recorded version (A&M had said on the single that it would not be included on album), where the chorus is repeated twice each time it occurs (on the single the repeat only comes at the end of the song). See previously published feature on "Lay Down" and previously published feature on"Part Of The Union" for more information.

'When I first heard Grave New World I thought they couldn't ever match it, but they have. What they've come up with on Bursting At The Seams is a million times more important than anything before, musically, lyrically and songwise. It's an album which will firmly establish them as one of the best bands around at the moment, but how long that lasts is up to them as they're no longer a minority taste.'

Bursting At The Seams was the Strawbs' highest charting album (though in sales terms, Grave New World was actually more successful). As with "Part Of The Union" in the singles charts, it reached number 2 in the UK album charts, staying in the chart for 12 weeks, again being held off the coveted top spot by an even stronger contender - in this case by Elton John's "Don't Shoot Me,. I'm Only The Piano Player".

Cousins, in the Sounds Talk-In in 1974 commented:

'I like to think that Bursting At The Seams, for all it came out with a glossy cover and showed us all in pretty clothes, ... was a very good album, a very sincere album, particularly "Down By The Sea" and "The River" ... they are the most sincere songs I've ever written in my life. They are the forerunners of where I am now.'

Back to Bursting At The Seams - features index page