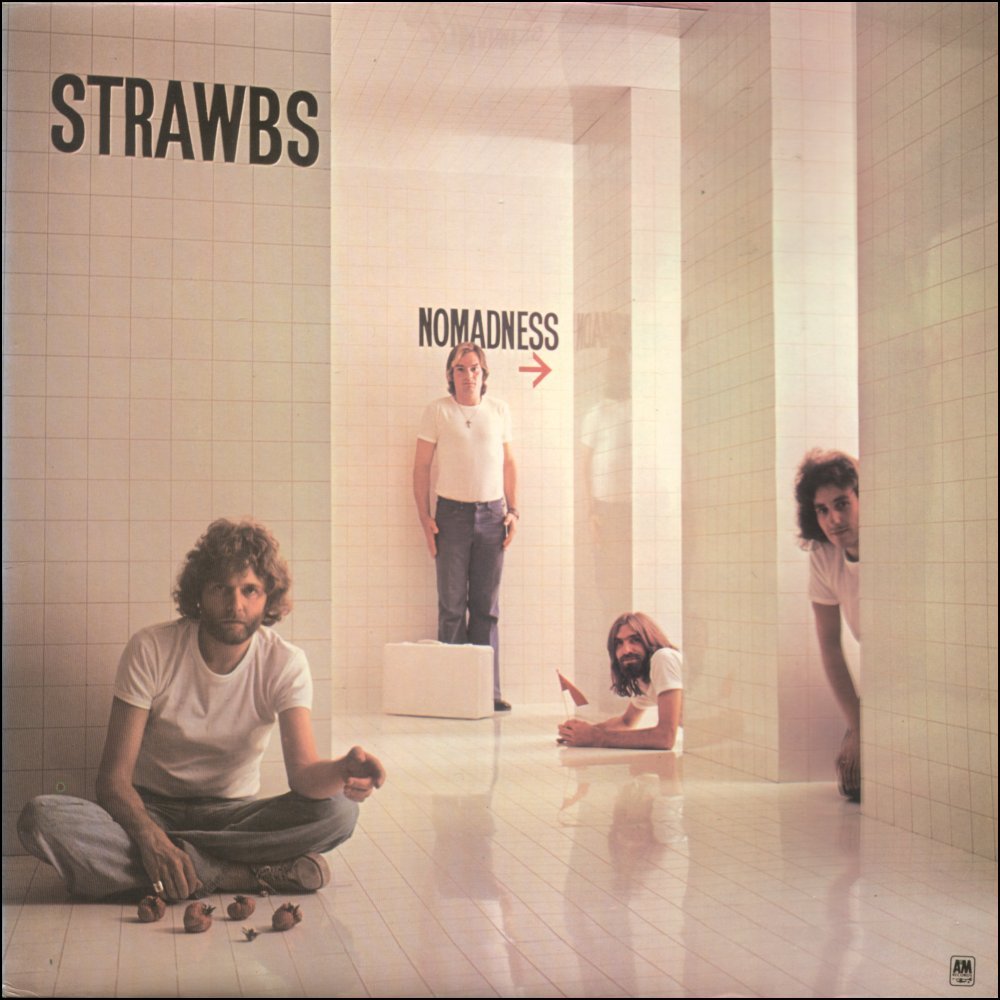 Back to main Nomadness page

Unlike the US, A&M UK didn't really go in for separate promo releases of albums (they did for 45s), but just stickered up or overprinted ordinary UK release copies for promotional use. Here's Nomadness - nice touch, the sticker is angled to match the slant of the tiles!

Vinyl album: SP 4544 (A&M, US, 1975). Outer sleeve is almost identical to UK sleeve - a tiny A&M logo and US cat number bottom right of front cover; US A&M address bottom left of back. Instead of the UK insert, the US gave you an inner sleeve with the lyrics on it, identical other than for some US info after "The Promised Land". Labels are US-style silver, on this variant, two tracks above the spindle, three below.

Vinyl album: SP 4544 (A&M, US, 1975). One of the promos above has three tracks above the spindle hole and 2 below. This variant release matches that. Pressed by Monarch Manufacturing Co.

Vinyl album: SP 4544 (A&M, US, 1975). Pretty much the same as the UK release, but the lyrics are on an inner sleeve rather than an insert. The words "Promotion Copy Not For Sale" appear at the top round the label rim. There are three tracks above the spindle hole and two above.

Vinyl album: SP 4544 (A&M, US, 1975).Only differences are that the words "Promotion Copy Not For Sale" appear on the label at the top, not round the label rim and there are two tracks above the spindle hole and three above.

It was previously unclear whether this is

but with Hero and Heroine being listed on Discogs as a "club" edition it now seems clear that it's the second of these.

Detail on back cover & labels

Vinyl album: SP 4544 (A&M, Can, 1975). Modelled on US release, has US address on back cover, with Canadian address overprinted. Silver Canada labels. No insert or inner sleeve in my copy, but assume it was the same as the promo.

Vinyl album: SP 4544 (A&M, Can, 1975). Promo release same as release, but with white label (Ghosts had a "DJ copy" silver label, but A&M Canada seem to have gone back to their roots with this one). The lyric insert is rather unusual, a textured, almost plasticised paper b/w insert. Came with brown A&M company inner sleeve, with English/French details.

Vinyl album: 89 373 XOT (A&M, Germany, 1975). The copy I have has a blemish on the label on side 1, so the image is reconstructed here. German printer details back cover bottom left, catalogue number back cover top right. Lyric sleeve rather than insert.

Vinyl album (Portugal, 1975). The front cover of the Portuguese picture sleeve Little Sleepy single proclaims the track to be from the album Nomadness ("do LP Nomadness"). Anyone have one ?

Front and back cover (details)

Vinyl album: L 37515 (A&M/Festival, Australia, 1975). Back cover has Festival Records details in blocky type at botom right - the US address still appears bottom left. Catalgue number back cover, top right. Silver labels. Instead of a 2-sided insert with the lyrics, Festival have included a inner sleeve, made out of rather sturdy paper.

Vinyl album: L 37515 (back cover)/L-36515 (spine)/L35715 (labels) (A&M, New Zealand, 1975). New Zealand release on silver labels. Both sides of the cover are shiny laminated, but the back cover is in black and white. Based on the US cover, it has Festival NZ details on the back cover, bottom middle right. No lyrics sheet in my copy but there may have been one. No great consistency as to catalogue number - three differnt versions on labels, spine and back cover.

Vinyl album: GP 269 (A&M/King, Japan, 1975). Single sleeve - outer cover is almost identical to the US release, save for the Japanese catalogue number at the bottom right of the front. White promo labels. Two inserts with this release: a 2-sided Japanese insert, with sleeve notes on one side and some lyrics on the other. The other is a 4pp LP sized insert - the outer features the English lyrics from the UK release (with Japanese catalogue number). The inside has some sleeve notes, more lyrics and pictures of other Japanese releases. The intention seems to be to insert the first inside the second, effectively a 6-page insert, which is how I've reproduced it here!

Same as UK lyrics first side

Inserts pp 2 & 3 (inside outer left and other insert front)

Inserts pp 4 & 5 (inside outer right and other insert back)

Vinyl album: AMLH 68331 (A&M, South Africa, 1975).. Outer sleeve is laminated on front but not back, very thin card, but otherwise identical to UK except for Interpak logo, back cover bottom right. Inner sleeve has lyrics, but LP is inserted to the side and overlaps from glueing the inner together mean that lyrics and credits for side 2 are partially obscured. Silver labels.

Vinyl album: SA&M 2161 (A&M/EMI Odeon, Brazil, 1975). Sleeve based on the US sleeve with US address at bottom left back sleeve. EMI-Odeon details bottom right, Brazil cat no top right. Also available on cassette.

The copy I have has a Promo stamp on side 2 - unlikely that a separate promo release was created. Unfortunately this was number 57 in someone's record collection with a sticky label on side 1 to prove it, which can't be removed. No lyrics sheet/inner sleeve in my copy but there may have been one.

Vinyl album: (LPS 88513, A&M/El Palacio de la Musica, Venezuela, 1975). Silver labels. Sleeve is the US version with local overprinting. On the front, the catalogue number at bottom right. On the back, the Venezuelan company logo "Hecho en Venezuela por ..." , the cat number and a "D" in a circle (a price code?). Also a square "Disco Es Cultura" logo. No insert, a scrunched polythene inner.

Whilst the track listing on the sleeve is in English, the labels are translated:

Outer front and back


Front, back and head

cassette: CS-4544 (A&M, US, 1975). Same running order as the album. Minimalist packaging - the inside of the cassette cover is blank, onbody printing on the cassette.

Outer front and back


Front, back and head

Program 2
Little Sleepy
To Be Free
The Golden Salamander (begin)

To equalise tape lengths, "To Be Free" is lopped off the beginning of side1 and pasted on at the end of side 2, with "So Shall Our Love Die" moving from the start of side 2 to the end of side 1.

Was there such a thing?

cassette: LK 57136 (RTB, 1975?). This Yugoslavian cassette release follows the track litsing of the UK LP. The copy I have has been lovingly pre-owned by "Leon", who has signed and typed on the inner spine "Leon - September 1977", and typed the number "35" on the outer spine and front. He has also written "36" and "Leon" on the cassette itself, and in careful black felt tip on the top edge of the cassette "HANDLE CAREFULLY". I will.

CD: PL 517 (Progressive Line (bootleg)). Standard jewel case CD, with inner (not including lyrics - which bears out the belief that it was reproduced from a cassette copy of the album). Very simple inner with some credits and a track listing and the "strawberry suitcase" image.


I picked up the Progressive Line CD edition of Nomadness and was not impressed. I'm positive now it's a bootleg and here is its worst audio abnormality: At 1:03 into "The Golden Salamander" the left channel suddenly loses the high end. This is a common symptom when a tape goes out of alignment with the playback head. At 3:26 into `A Mind Of My Own' the same thing happens again. Suspicious, I dug out my old A&M cassette of Nomadness and these two spots are opposite of each other on side one and side two the cassette! I remember on ebay a while back someone was selling still sealed cassettes of Nomadness. My guess is someone at Progressive booted this from a cassette and didn't even listen while it was digitizing and missed the alignment problem. Twice!

CD: A&M 75302822 (Universal, 2008). Long-awaited official 2008 re-issue on CD of a key Strawbs album with 2 bonus tracks, the already released "Still Small Voice" and "It's Good To See The Sun" which even Dave had forgotten existed. Superb sleeve notes by Mark Powell, and full lyrics (not bonus tracks) included.

CD: A&M SR80517232 (Sunrise, 2008). This bootleg most likely copies the 10-track Progressive line bootleg above (some of the styling and typography is similar), without the bonus tracks on the Universal CD release.

Back to main Nomadness page