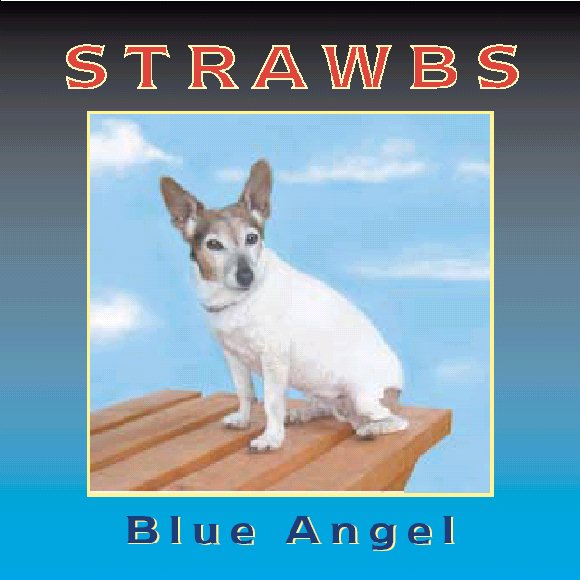 I WAS LIKE A KID AGAIN, AND SO WERE YOU - Preview by Dick Greener

Aha, a new Strawbs album - how long ago was it since we had that pleasure? This is the first new Strawbs electric album since 1991's Ringing Down The Years - whilst Blue Angel's raw material has come together from a variety of sources (some 1990s recordings by the full band, including the title track and some tracks originally aired on Cousins & Willoughby's The Bridge), pretty much every track has been transformed beyond recognition by further recording and remixing, in some cases so much so that it amounts to a near-complete rebuilding.

It's the first album to feature the electric guitar "dream team" partnership of Lambert and Willoughby, which had become such a keynote to the UK electric band gigs in 1999-2001. And the return of Rod Coombes virtually recreates the Hero And Heroine band (sans Mr. Hawken regrettably) for the first time since 1975. And finally, both "Blue Angel" and "Oh So Sleepy" were recorded but never finished for Deep Cuts back in '76 and I'd expect the versions here - particularly where Lambert has been added in - to reflect some of that work also.

Overall, some stunning stuff, well produced and realised. There's not a bad track on the album which opens with the title track, the absolute peak for me. There's a fair degree of anticipation as this Dave Cousins song unrecorded by Strawbs is high on everyone's list of Cousins' best songs ever, and the version on Two Weeks Last Summer is very very good indeed. The song kicks off with the familiar guitar figure set against a calming mellotron/pipe organ style backing. Dave's voice comes in, joined by acoustic guitar and piano for the two verses, split by a reprise of the guitar/keyboard interplay.

After the first Blue Angel chorus, there's a cracking Willoughby note bending buzzsaw guitar break over a staccato beat which subsides gently into the reprise of the guitar/pipe organ intro for the second section "Half Worlds Apart". Piano takes over, very Wakeman-esque behind the verse, which is taken at a fair speed, certainly faster than the original. Power chords, drums building through the verse, to a fairly jaunty take on the Blue Angel chorus with massed Strawb vocals in support. More staccato power chords, tinkly piano, resolving into a single repeated guitar note. Dave's voice on the opening lines of the second verse is treated until it sounds as though it comes from some ghostly Sixth Sense dimension - very effective, no doubt representing the "dreamstate".

A reprise of the massed ranks chorus, a chord change and a Willoughby guitar break takes us to the first verse of "At Rest" over gentle piano, cymbals and drums. Guitar break between that and the second verse, where the organ comes more to the fore and then some more between verse 2 and 3. A tremendous echo on the word "wane".

Then the lengthy chorus coda - choral backing for the first time round, then joined by Mary Hopkin on dual lead vocals. Some more soaring guitar from Brian, some more choruses until the song closes with the slowdown ending ("be merciful oh please be gentle") those who've seen the 90s band perform the song (or have the Chiswick DVD) will recognise.

"Oh So Sleepy" is now an out and out rocker, with Lambert's Townshend power chords all over it and joining on backing vocals for the chorus. The interplay between the chords and the lead, including a screaming guitar solo from Brian works very well indeed, and the bass and drum tracks (from Messrs Cronk and Coombes) are brought to the fore also. Lyrically perhaps not Dave's strongest outing, it's a stronger track in this incarnation and would go down very well indeed next time the electric Strawbs tread the boards.

The band circa 1993 recorded this version of "Further Down the Road" - it's is not the version which appeared on The Bridge. Piano and organ open this quieter track, then Dave's and Mary Hopkin carry the vocal. Another superb solo from Brian lifts the middle section.

Baroque & Roll's acoustic "There Will Come The Day" has a very different opening indeed - to my mind this version of the song is very much more powerful. A single power chord, then a keyboard joining in - sounds like a cross between a hammered dulcimer and a harpsichord drenched in echo - and a guitar intro, which is not a million miles from the opening of "Down By The Sea" open it up. Dave carries the emotive verses on his own at first, with Mary later on, with others joining for the choruses. There's a tasteful guitar solo from Brian over a light choral background. There are little choral fills, and in the closing choruses, some brass flourishes from the keyboard. The upbeat words and the rising then falling cadences of the chorus lift the mood after the harsh sounds and images of the verses. Quite a production number.

Another mood entirely for "Strange Day Over The Hill", with Rod Demick's harmonica intro over shuffle drums and acoustic guitar. The whimsical lyrics are very well suited to Dave's understated vocal. The chorus has some nice, almost High Society-style backing from the other Strawbs, some nice ooohs and aaahs underneath the main vocal and then Brian's guitar takes us to the fadeout with a nice little round starting up - almost too soon.

"Cry No More" has a school hall piano opening, leading into some keyboard pad sounds with piano on top. Cousins' vocal on the verses is querulous, and there's multi-tracked Hopkin on the choruses. Brian plays an acoustic spanish guitar solo and finishes of the song. A pastoral interlude.

"The Plain" is an aural picture, opening with a rumbling, swelling keyboard noise (like it's been put through a Leslie rotating speaker) - think the noise that the spaceships in Independence Day ought to make as they rumble overhead. This leads to quite a lengthy acoustic guitar figure (think the opening to "Beside The Rio Grande"). There are some interesting keyboard noises under Dave's bleak vocals on the first verse, joined by electric guitar and drums for the second. Brian contributes one of those melancholy note-smothered solos entirely in keeping with the mood, and the whole thing ends with another rumbling thunderous sound

Built round a slightly treated electric guitar riff over some programmed drums from Mr Cronk, with the keyboard picking chords around it, "Do You Remember" again features Mary prominently on the distinctive chorus. Some nice Cousins wordplay in the lyrics - "you were straight and so was I".

"Rhythm of the Night" is another guitar-based track prominently featuring Messrs Coombes and Lambert. It opens with a snarling guitar riff, has power chords and fairly busy, driving drums, including a section with handclaps percussion and massed chorus. Not certain I can connect with Dave's lyrics on this - it seems odd for Cousins to be singing about "roly poly mamas" - but it's got lots of energy and some excellent lead from Brian. A bit of a messy ending, though, sort of live in its feel.

Dave's slow ballad vocal style (a la "Goodbye") is the keynote to "Morning Glory", over a lush strings/keyboard background, with multi-tracked DC/MH vocals on the chorus. Understated lead fills from Brian and a nice solo over the string background.

The performance of "Sealed With A Traitor's Kiss" is much like a DC/BW duo performance except with DC on piano. It has an emotion-filled vocal from Dave, albeit restrained in terms of vocal histrionics - at one point ("you can't have been the only man ...") Dave's voice audibly cracks. Brian's back to acoustic fiddly bits to fill in round the sparse piano accompaniment.

"Lay Down" is re-recorded more or less 1993 band style, with Brian opening on guitar, and a chorus including Mary to start things off. There are more key changes than in the original and it sets a driving pace, though the familiar riffing between verses and at the song's close somehow isn't quite as striking as Lambert's historic take on it.

Last, but by no means least, there's an enhanced version of "The King", which first appeared on a privately pressed single back in 1980 (see The King page. A newly-minted opening chorus, then Dave duets with the lovely Maddy Prior over Andy Richards' keyboards, Tony Fernandez and the redoubtable Mr. Cronk on drums and bass. Churchy organ sounds, choir chorus vocals (also featuring Rick Kemp, Maddy's other half) with Brian's guitar on top. A Christmas hit if ever there should have been one.